Tim Bale’s timely book has attracted a good deal of attention from reviewers, unsurprisingly given the nearness of a UK general election and the likelihood that the Conservatives will be in government after it.  Details are available from the publisher’s website here.  For a taste of the reviews, Simon Jenkins in the Guardian is here, Mark Hennessy in the Irish Times is here, and a discussion by Daniel Finkelstein of the Times (also a protagonist in some of the events Bale recounts) here. 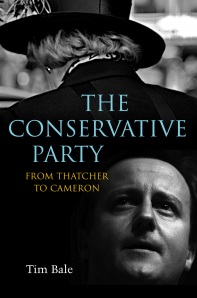 Bale tries to bring together ideas, institutions (particularly party organisation) and interests in studying the Conservative Party as an entity.  Overall, his focus is on ideas and policy, and he finds a large amount of continuity in Conservative positions from Thatcher through to the present.  As part of this story, he looks not just at the Conservatives in Parliament, or the party at the grassroots (though there’s not much about that), but also ‘the party in the media’ – chiefly the Mail and Telegraph groups, but also the Times and the Express.  As Bale tells it, Cameron’s achievement has been chiefly in the area of marketing: decontaminating the Conservative ‘brand’, giving it the ‘right to be heard’ as part of the general political debate, which it had lost thanks to its policies in the 1990s and early 2000s – meaning that even when the public agreed with Tory positions, they’d stop doing so when they realised it was the Conservatives advocating them.  That meant that Cameron started off by emphasising how the Conservative Party had changed, with its new emphasis on environmental issues, localism, and loyalty to the NHS, new logo and so forth.  Having done that successfully during his first 18 months or so as leader, he was able to start to talk again about traditional Tory issues like law and order, immigration or Europe.

Interestingly, Bale thinks that this change was a planned progression that Cameron had intended from the outset, not something linked to the arrival of Andy Coulson at CCHQ. He also doesn’t mention something else that was evident in those first 18 months, of the Tories taking the same policy positions as the Labour government save on a few carefully-chosen issues, to minimise room for attacks while he rebranded the party.

Taking the party with him has been key to this task.  This was made easier by the previous eight years or so, which had made it plain to pretty much everyone that they needed to change and operate closer to the centre ground of politics, rather than pursue their own preferred policies which either didn’t interest the wider public or positively repelled them.

Bale suggests that there is a gap between the position of Cameron and his circle, on one hand, and the party at large – but that it’s a pretty narrow one, deriving more from Cameron’s focussed concern with getting elected and pragmatism about doing so, than many of his party members share.  But he also points out the increasing economic dryness and Euro-scepticism of Tory MPs, something supported by the more recent survey of prospective candidates carried out by Conservative Home, summarised here; the full results are here.  He also shows how Cameron has been willing to throw some red meat to the back benches from time to time, most notably (so far) over Europe – membership of the EPP group in the European Parliament being the most notable example.  That does raise the question of what other ‘red meat’ might be thrown to the activists in the party when in government.

The book covers the first three years or so of Cameron’s leadership in some detail, though the period since 2007 is only dealt with sketchily in the conclusion.  It doesn’t cover more recent developments since the depth of the economic crisis became clearer, various figures on the front bench have managed to contradict each other (particularly over spending cuts), and Labour has managed to present a more coherent front.  Otherwise, it’s a thorough and meticulous account, though largely one that will be familiar to regular readers of the London press.

My particular interest was what Bale had to say about the territorial dimension of Conservative politics.  This important issue hasn’t been covered much since James Mitchell’s admirable but now dated Conservatives and the Union (Edinburgh University Press, 1990), though there’s a chapter on the Scottish Tories by Peter Lynch in Mark Garnett and Philip Lynch’s The Conservatives in Crisis (Manchester University Press, 2003), as well as David Torrance’s ‘We in Scotland’ (Birlinn, 2009) on Thatcherism. Given the complexity of the position Cameron is in, and how complex his response has been in contrast to the old-school London-centred unionism of his predecessors, there’s a lot to consider here.  However, Bale’s book is disappointing about this.  This is a book about ‘high politics’ as it operates in London SW1 (and maybe W11).  The Conservative Party in the country is a pretty marginal part of this story, and party members are equally marginal to it (more acted-on than acting) whether they’re in Grangemouth, Monmouth or Bournemouth.  Unsurprisingly, given the focus on organisation, the main concern there is candidate selection, the role of the ‘Priority List’ and so forth.  Questions of electoral geography and the territorial make-up of the UK simply don’t figure on the agenda – Scotland and Wales get mentioned mainly in the context of devolved elections, which get a sentence apiece.  Indeed, there’s precious little about constitutional matters generally here unless one counts EU issues as ‘constitutional’ – a bit about Lords reform under Hague’s leadership, and the row that led to Lord Cranbourne’s departure from front-line politics.  Even the Democracy Task Force only gets a single mention (for the views of its chairman about a ‘British bill of rights’ – not for any of the policy proposals it came up with).

At first, I thought this was a deliberate snub, but I suspect this simply reflects Bale’s evidence; as well as a comprehensive reading of the party’s website and other official documents, and of newspaper clippings and the secondary academic literature, he’s also done a large number of interviews.  From that perspective, constitutional issues – let alone territorial ones – scarcely count.  That’s not what interests either the voters at large, or party members.  However important they may be, they fall off the agenda for most politicians, not to mention the journalists who are the ‘party in the media’.

This attitude suggests a further likely source of difficulty for the Conservatives if they enter office.  The constitutional agenda that faces them is scarcely a short one – as the recent briefing from the Constitution Unit shows.  Progress on many of these – notably party funding and Lords reform – has been curtailed for some years because of the differences between the political interests of the various parties.  The MPs’ expenses crisis shows the price that can be paid by the political system if such issues are not dealt with properly, rather than being left to fester and only dealt with when there’s a palpable crisis.  Devolution presents a different set of issues.  There are a number of points on which the parties need to have policies – devolution finance, a referendum and legislative powers for Wales, the knock-on effects of Tory plans to reduce the size of Parliament, to name a few.  Beyond this, there are important questions about how the UK works and the relation of the various parts to the whole.  There may not be many votes in these, particularly in England, but they are of very considerable importance.  If the Tories can neglect such issues, and serious commentators like Tim Bale overlook them, that doesn’t bode well for the sort of serious, sober and thought-through approach that is needed.

One response to “Reading Note: Tim Bale’s ‘The Conservative Party from Thatcher to Cameron’”

This site uses Akismet to reduce spam. Learn how your comment data is processed.